This week the platform Altcoin.io Exchange has announced the alpha release of the first atomic swap wallet with a working GUI available for public testing. The company’s founder, Andrew Gazdecki, believes the technology has the potential to disrupt every centralized exchange currently used by the cryptocurrency community.

During the first week of October, news.Bitcoin.com reported on the first successful bitcoin and ethereum atomic swap completed by the Altcoin.io Exchange development team. There’s been a lot of atomic swap action happening lately between currencies like bitcoin, zcash, decred, bitcoin cash, and others as the technology is a fairly hot topic. For instance, yesterday Lightning Labs developer, Elizabeth Stark, announced her company performed the first atomic swap between litecoin and bitcoin testnets.

However, all of the atomic swaps so far, including yesterday’s LTC<>BTC swap, has been done with a command line, and the process is pretty technical. Altcoin.io’s CEO Andrew Gazdecki says the company’s alpha wallet is the first user-friendly interface that can swap ethereum and bitcoin with ease.

Testing Out the Wallet With Testnet Coins

News.bitcoin.com tested the wallet using two different browsers, and swapped a total of 0.1 BTC for 2.33934275 ETH. The client currently operates utilizing both bitcoin and ethereum testnet coins and gives a user two wallet addresses to fill. Further, the wallet supplies two links to an ETH and BTC testnet faucet so the wallets can be funded. After a few hours waiting on confirmations, both of my wallets were filled with the two digital asset testnet coins. Following the wallet credits, I then typed that I wanted to trade 0.1 bitcoins and the wallet gave me the exact amount of ether I needed (or my trading partner) to trade from the other browser. 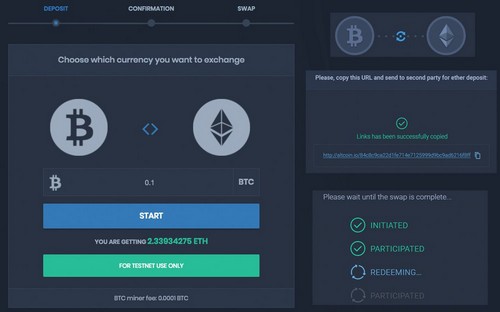 After hitting the ‘start’ swap button, the platform gives a URL for the person you are trading with or for me my second browser. Using the URL, I copy and pasted it into my browser and saw my trade. The platform’s interface then gives me an ‘agree’ tab which essentially authorizes the atomic swap. There’s a little wait time to redeem the trade, but the process took a few minutes and both browsers must remain open, or the swap will cancel. If the exchange is canceled, both parties will get the original coins back if the trade doesn’t complete. 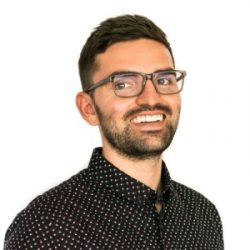 The Altcoin.io development team says absolute safety is guaranteed throughout the whole process. Gazdecki tells news.Bitcoin.com that there is no centralized repository, as users remain 100 percent in control of their coins. There is a set time limit for trades as the platform uses hashed time-locked contracts (HTLC) to complete the process. Altcoin.io’s wallet gives a cryptographic code confirming both parties have sent the coins, alongside a code declaring the settlement was complete much like a receipt. Gazdecki believes atomic swap technology with its ability to exchange funds across two blockchains in a trustless manner will eradicate the idea of centralized exchanges in the future.

“Centralized exchanges are virtual honeypots for hackers,” Gazdecki tells news.Bitcoin.com.  “Beneath a veneer of bypassable security, lies a cache worth billions of dollars. All they need do is exploit a single weakness to access the funds of every trader doing business on that platform.”

Atomic swaps have the potential to change all of this and make cryptocurrency trading entirely trustless.

This first release aims to bring the idea of interface friendly atomic swaps to the general public so people can see how well the technology works explains the company’s founder.

“With this first alpha release out, our hope is to bring atomic swaps to the masses and really show the potential this technology truly has for the cryptocurrency community — We see this project evolving into a fully decentralized exchange where users are fully in control of their tokens at all times,” Gazdecki emphasizes.

Gazdecki explains the developers plan to create automated order matching, add the ability to atomic swap dozens of other tokens, and third-party wallet integrations so individuals can essentially convert any token right within their existing wallet. “We will have more tokens to atomic swap within the next 2-3 weeks at the very most,” Gazdecki concludes.