Just recently, news.Bitcoin.com reported on the successful Bitcoin Cash hard fork that took place on November 13. However, according to reports across the web, the fork split into two, and an unknown group began mining blocks on the legacy chain producing what they call “Bitcoin Clashic.”

Allegedly there’s a network called Bitcoin Clashic that is utilizing the legacy BCH chain prior to the November 13th’s fork. The first observations of this chain operating behind BCH were noticed by Bitmain’s CEO Jihan Wu. The mining company’s founder explains that an unknown mining entity has dedicated hashrate to the rules of the original chain. Following Wu’s statements, the public was greeted by the group operating the network with a website and Twitter handle.

“All Bitcoin holders as of block 478558 are also owners of Bitcoin Clashic — All are welcome to join the Bitcoin Clashic community as we move forward in creating sound money accessible to the whole world,” explains the group’s website. 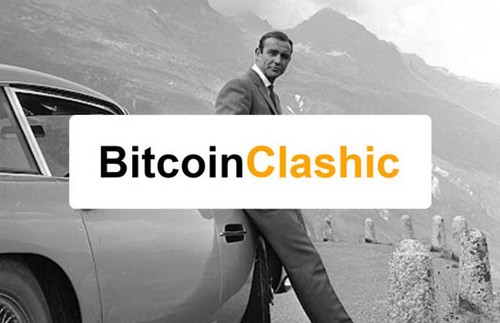 At the moment there is no working blockchain explorer for the Clashic network, but there is a dedicated mining pool. There is an explorer currently under construction, called Satoshistruevision.com, but the site contains no data. The Clashic Twitter handle offers a network stats page as well, but the service has been unavailable at the time of this report. Clashic’s Twitter is very active and started tweeting on November 11. The first announcement on that day explains the Clashic team’s intent stating:

We are a private group of influential miners that will mine the existing chain to ensure the emergency difficulty adjustment takes place as intended — We believe that Satoshi would have been ok with a high variance of difficulty as a part of his true vision.

A Troll or Not a Troll? That is the Question

Presently, the Clashic infrastructure is basically a ghost town, minus the fact that the CEO of Satoshi Labs says if the network is built properly it would “work out of the box” using a Trezor hardware wallet. As far as exchanges and wallets there are none, but Clashic’s website details users can run a full node client using the Bitcoin ABC version 0.15.1.

Bitcoin Clashic explains via Twitter that its difficulty is dropping.

No one knows who the owns the Clashic site as the webpage was registered using a Whois domain owner cloaking platform. On forums and across social media, bitcoin cash supporters believe the website’s owner is just trolling and many consider the project a joke. Moreover, BCH supporters also notice that quite a few people from the other side of the great bitcoin scaling debate who openly dislike the BCH chain have been bolstering and promoting Clashic since the group appeared on the internet seven days ago. Further, Clashic isn’t the only fork considered a ‘troll-blockchain’ as there have been reports of other forked networks called Super Bitcoin, Bitcoin2m, and Bitcoin Diamond as well.