news.Bitcoin.com recently reportedon an unknown software developer called Bitpico who stated the Segwit2x fork will still happen on November 15 as intended. Bitcoin proponents are not sure if the developer is serious but a new website has been published called Bitcoin2x.org. 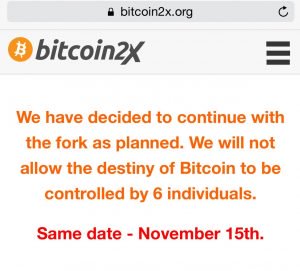 Bitcoin enthusiasts are still concerned about a fork happening next week as an unknown developer named Bitpico has threatened to fork the network anyway. Bitpico has been active on the Segwit2x mailing list for quite some time and has his own Github profile. However, there’s not much known on the open web about the character or his organization.

“We are carrying out the fork regardless as everything is set in motion,” explains Bitpico using the Segwit2x mailing list.

On November 9, many bitcoin proponents shrugged off Bitpico’s statements as empty threats. However, the very next day a new website appeared at Bitcoin2x.org which also declared the fork was still happening. It’s not confirmed at the moment whether or not Bitpico is connected to the website or who operates the site. The website’s welcome message is very much like Bitpico’s threats, with the site explaining on November 10:

We have decided to continue with the fork as planned. We will not allow the destiny of Bitcoin to be controlled by six individuals.

Bitcoiners are still concerned about the fork still happening, as the subject is still being discussed heavily across social media and forums. One of the reasons behind why people are still worried about the fork is because Segwit2x nodes are still operating. Essentially with these nodes it only takes one miner to initiate a fork in the protocol. Further, as we reported on November 9, Segwit2x futures are still quite active, and traders are still purchasing “B2x.” Because many of the Segwit2x protocol elements are still in place, alongside Bitpico’s and the Bitcoin2x.org’s statements, bitcoiners believe a fork could still happen. 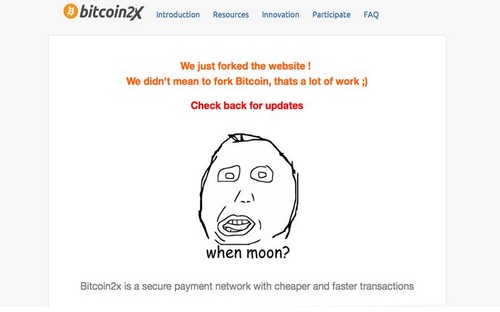 Even though the threats of forking continue, the lead developer of the Segwit2x working group, Jeff Garzik, doesn’t seem too concerned. “Without the miners to enforce, it will be a tiny offshoot that mints blocks once a day or so,” explains Jeff Garzik in response to a question asked on the team’s Slack channel. Also, there are no signs of any characters named Bitpico or any rogue groups discussing a continuing fork within the working group’s Slack communications channel.

“We just forked the website — We didn’t mean to fork Bitcoin, that’s a lot of work — Check back for updates,” details Bitcoin2x.org.