Electroneum, a cryptocurrency startup that offers an app that can be used on smartphones to mine digital currency, has come under a massive attack after it raised $40 mln in its ICO. 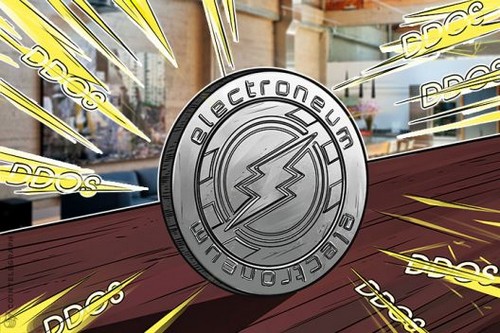 The UK-Based company was hit by a DDoS attack – Distributed denial of service – which has locked out investors from accessing their accounts. This has led to the company being forced to delay their full launch of their mobile mining app.

The DDoS attack, which has become the favorite form for cybercriminals looking to disrupt many of these high flying ICOs, involves an array of compromised computers all aimed at accessing one site.

This Botnet, as it is known, floods the website’s servers and spams it with too much traffic for it to handle. Legitimate traffic is unable to get through, and it becomes far more susceptible to hacking.

Electroneum has as such locked down their accounts as they claim there are over 140,000 people who won tokens from the ICO. In this time it is trying to dislodge the attack and bring its network back online.

Perhaps Electroneum went about punting it all wrong, as they have now become a soft target. Moreso, they had football manager Harry Redknapp tweeting about its possibilities.

Redknapp said he didn’t know how to work a computer, had never heard of email and had never sent a text message.

Perhaps the hackers saw an opportunity in taking on an ICO that had been successful but had its weaknesses in terms of security. Indeed, some of the users have already asked questions.

One user locked out of their account complained on Facebook: “The question has to be asked… why didn’t they do all this testing before the launch?”

Another said: “With $40 mln in the bank you should be able to hire and sort this quicker. This should all have been done before applying/listing on the exchange.”

A statement on Electroneum website said: “We are very sorry for the continued delay and understand your frustration. We are working as hard as is humanly possible to complete the works and get everyone live so we can get on with the next (exciting) stage of the evolution of Electroneum.”