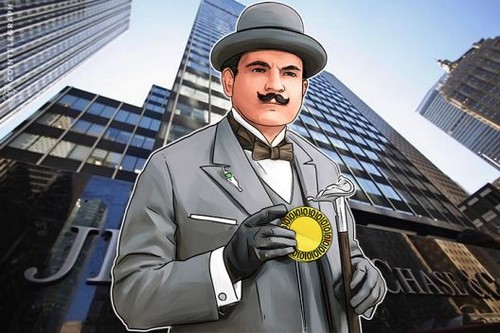 It’s quite hard to understand what actual stance JPMorgan Chase has on Bitcoin and cryptocurrencies – given recent statements made by CEO Jamie Dimon.

The multinational banking and financial services giant announced plans to launch trading of Bitcoin futures on the Chicago Mercantile Exchange (CME), but the head of the institution has been no less bullish on his stance on Bitcoin.

“You can’t have a business where people can invent currencies out of thin air and think that people who are buying it are really smart. It’s worse than Tulip Bulbs; it won’t end well. It’ll eventually blow up; it’s a fraud.”

The CEO of one of the biggest financial institutions in the world is telling us that cryptocurrencies are a fraud – yet his company is preparing to get in on the action.

There seems to be a major discrepancy between the CEO’s own thought’s on the matter and the bank’s business plans.

With Bitcoin hit a new high well above $8,000 this week, the sentiment towards the virtual currency and it’s altcoin successors is steadily changing.

If and when CME gets the go-ahead to open trades on Bitcoin futures in the coming weeks, it wouldn’t be surprising to see the likes of Dimon and other naysayers change their tune towards cryptocurrencies.

While the business dealings of the company’s Swiss offices faced heavy scrutiny this month, it’s not hard to see why the bank would look into every avenue to make money.

The reality of the situation is that financial heavyweights like Dimon have the ability to manipulate the markets with every public statement they make. Dimon’s attack on Bitcoin in September saw the price drop, showing just how much sway he has in the financial world.

Perhaps Dimon wanted a slice of the cake and wanted to cause a stir in the market, forcing the price to fall before buying up a load of Bitcoin himself. That is pure conjecture, but it’s a real possibility.

While governments, banks and financial institutions continue to drag their feet in adopting cryptocurrencies, Bitcoin, Bitcoin Cash and Ethereum price continue to rise.

Sentiments are likely to change in the coming months and 2018 holds a lot in store for the crypto world.

While Dimon takes a hard line against Bitcoin, the likes of ex-hedge fund manager and billionaire Mike Novogratz are all for it.

Novogratz conceded that Bitcoin might be in a bubble, but that didn’t stop the mogul from predicting that the cryptocurrency would soar to a $10,000 high next year.

“I can hear the herd coming. I was in San Francisco and met with a few big institutional investors and they’re still a little ways away, but they’re coming. Lot’s of funds are being raised.”

The 52-year-old’s recent return into the financial space, sparked by the interest in cryptocurrencies, says a lot about the growing buzz in the space.

As more highly influential investors come on board, it’s only a matter of time until the rest follow suit.