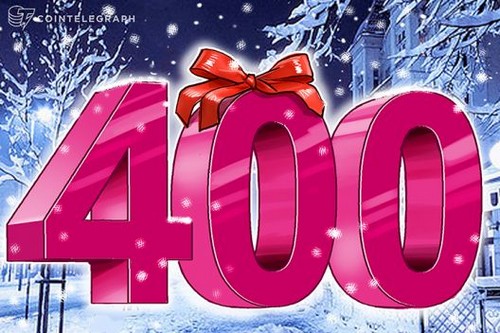 Following a rapid increase this Thursday, Ethereum has broken through a psychologically important threshold of $400, establishing a new all-time high – it hovers around $420 at press time.

Despite some market stagnation caused by the news of the $280 mln Parity wallet hack in early November, the second-most-popular cryptocurrency looks stronger than ever.

This most recent move comes after a similarly positive dynamic on Bitcoin, which has seen it stabilize firmly above $8,000 – it is generally accepted that most cryptocurrencies often follow the direction of BTC price.

Ethereum has also had positive news of its own, like the announcement of the first-ever regulated bond based on the coin.

The last time the price has reached a similar height was in June 2017, when Ethereum hit the previous all-time high of about $407.

Curiously, the renewal of the $400 mark was predicted this August by Ronnie Moas, an analyst famous for his often correct forecasts of cryptocurrency prices.

Multicoin Capital Partners Explain How They Invest in Crypto Startups